Can the branding principles that apply to organizations also apply to place?

A few years ago, we decided to spend a bit more time than we had in the past with local outreach. While we had achieved a decent amount of national design press attention, designers rarely got local design press, aside from the Addy winners. So we started an AIGA chapter where there was none, joined boards, and generally made ourselves more visible.

We moved to this part of the country years ago for jobs at Herman Miller, later starting Peopledesign. But it wasn't until we increased our interaction with the local scene that we really began to think more about the place we live. When asked to contribute to a local online journal as a guest blogger, Kevin's first submission was entitled "The West Michigan Brand."

We never anticipated the response that the article would receive. It was direct and visceral, and people from all walks of life surfaced to discuss a topic that had clearly touched a nerve. Everyone from the Chamber of Commerce to the former Mayor wanted to talk more about the idea of the region as a brand. Some disagreed with the premise, others were enthusiastic fans, but most just wanted to hear more.

It could be that we simply hit on a topic that had particular heat locally. West Michigan has been seeking and earning a place on the map for many things including ArtPrize (the world's largest art prize), the Grand Rapids LipDub (also a "world's largest"), the new Grand Rapids Art Museum (the world's first LEED-certified art museum), and more. We've been witnessing the transformation of a sleepy, mid-sized Midwestern town coming into its own.

The blog post also led to the theme of a recent Symposium on Film, Art, and Literature entitled "Hey Michigan, who do you think you are?" They asked Kevin to be their keynote speaker, so we took this opportunity to explore the idea further.

All this led us to wonder: Is it possible to brand a region? Can the branding principles that apply to organizations also apply to place?

We believe so, but it is a challenge. Many efforts have been made in this area, from tourism boards to business development initiatives. We suspect that these efforts become too fragmented to communicate as a whole. It's no surprise really. West Michigan, for example, is comprised of a hundred townships and several counties, each with their own agendas, needs, and priorities. There's no single decision-maker for West Michigan, but it's clearly a single economic region and media market. 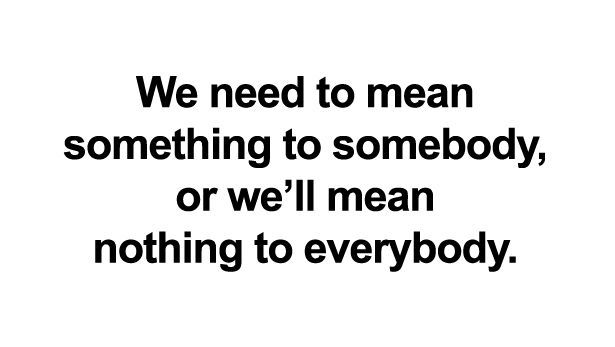 The challenge isn't insurmountable, just new. As regions compete with each other for resources and attention from around the globe, we suspect we'll see an emerging era of regional branding. Just as companies are emerging from confusion over brand ownership and management, so, too, will regions find the skills to overcome municipal differences for the greater regional good.